If you're like me, your daily in-take of infosec news high-lights new vulns, things broken, and maybe some reverse engineering of some malware, but my day-to-day life is as a software developer in the infosec world. I build software, and I'm going to show you how to quickly stand up something useful using many of the technologies I use in my day-to-day life.

In this series I'm going to show how to quickly stand-up a web app that you can drag and drop files to that will get scanned using some YARA signatures. The value of this series is not so much in the end product as it is in learning how all these tools fit together and how you can build things quickly, with some polish along the way so your projects aren't just hacks that fall apart on the first power failure or when someone else tries to use it. A lot of development today, especially for web-apps, is just gluing different components together: Half the battle is knowing what to use to accomplish your goals, and the other half is just applying the glue. This will teach some of both skills.

To give you a better idea of what you'll be making, here is a screenshot of the final product. 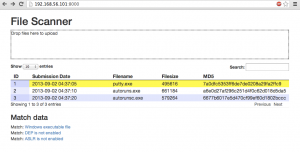 You can see the final code by looking here, but there is a lot of setup needed along the way, maybe I'll write an installer if this gets some attention.

Standing up the environment

You can now ssh in. Do that, because working through VitualBox's console display is annoying. You can also edit your /etc/hosts file now if you want so you don't have to remember the IP address.

SSHFS: Get yourself a way to edit files

As legit as a console and vim are, it's 2013, and using a GUI text editor like Sublime Text can make life nicer. That means being able to access files as if they were local. You could setup an SMB mount, but let's use sshfs. If you're on Linux, you can follow this, or on Windows try this, but I'm on Mac OSX, so I installed OSXFUSE and then SSHFS from here.
On the guest I ran:

From my host, I then ran: You'll be able to access your guest's files now, but in order to get the /Volumes to show in your host's Finder, run the following:

All that work and we still have nothing to show for it. Let's make a web server. We'll use python's Tornado library. On the guest run:

Create the directory /var/apps/scanner to work in. Create a file there named webserver.py with the following contents:

Tornado allows you to quickly create web services. You could do something like this with Apache and mod_python, or with Python's twisted library, or gevent. In software development there are often many options to choose from at each step. Tornado I've found is quick and easy, although with that you lose some things like the default logging that Apache has. Also, all python apps are single-threaded, so you have to be more mindful not to do any actions that would cause blocking, like slow database queries.

Reading our code from the bottom up, it is simply saying "Create a web server on port 8000. Anything that tries to get the page '/' should see whatever the MainHandler returns. The MainHandler simply writes 'Hello world'".

Turn it into a static file server

Right now, your webserver can't display any files. It can only respond with "Hello world" and only if the client tries to access "/". Otherwise it gives a 404. Let's turn our server into a static file server by killing the "python webserver.py" process, replacing the webserver.py file with the following and starting the process back up.

Now create a directory /var/apps/scanner/static and create a index.htm file there. For example:

Tornado caches your files, so any time you edit that static index.htm file or any other file you plan on serving, you'll need to restart webserver.py.

To give you a feel for how handlers in Tornado work, let's add two additional ones to our code.

The first new handler (TimeHandler) at http://192.168.56.101:8000/time" shows you how easy it is to get your own python code running whenever the client visits one of our registered handlers.

The other handler (AdditionHandler) at http://192.168.56.101:8000/add/3+15 so you can see how to include parameters in your URL's and how those are interpreted by Tornado. The handlers are registered using regex's, and the "variables" of those regex's get included as additional parameters to the get method.

Play around and make some different handlers!

← File scanner web app (Part 2 of 5): Upload files | Summary of "Making Strategic Sense of Cyber Power: Why the Sky is Not Falling" →