One of the tricky parts in building IceBuddha is that it needs to be able to display the hexdump for an entire binary. My goal has been to be able to do this for any binary under 10MB. IceBuddha reads the entire binary into memory into an array called data. To display a hexdump, my first solution was to just convert this to to html with something like:

I wanted to be able to high-lite bytes though, which gives two options:

If I want to flip on high-liting somewhere, all I need to do is:

I decided to go with the second option, because it seemed easier to work with.

The problem is for a 1MB file, I end up with over 10 million DOM elements, plus I actually have DOM elements for all the ASCII, so 20 million. This many DOM elements freezes your browser. Looking around online, 10K elements is a good rule of thumb absolute max, and most places recommending you stay under 1K.

I decided to ignore this problem for a long time and just get the rest of the app functional, and when any file is loaded it truncates the file to 2K. Obviously I would need to fix this eventually, and so I have. My solution was to implement what will be very familiar to game programmers: Only draw what is going to be displayed. I keep track of what the user is trying to view, and only create html for that data.

I need to refactor badly, but here is what is going on. All the hex data is displayed in a div called #byte_content, which has the css max-height: 200px; overflow-y: scroll; applied to it, which means this is the "view window" and will have a scroll bar.

In drop.js there is a function getByteContentHTML(...) that creates a giant table that is mostly going to be empty:

So I make a giant table (#byteScrollableArea), and the first row (#byteFillerAbove) is going to be empty and includes whatever is above the drawn data (#hexCell and some other stuff), then the data gets written which will extend above and below the currently visible area, and then the table just extends down to the bottom of whatever is left of the file. I tried to diagram this. 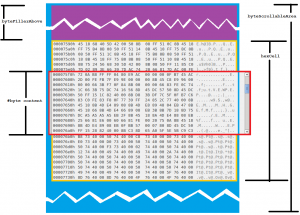 The reason for all this, is I wanted the scrollbar to still give an indication of where the user is looking at in the file. Are they looking at the start? The bottom? If I just displayed the first 2K bytes, and then appended to these as they scrolled (like the infinite scrolling in twitter) you would have two problems:

The second problem could be easily addressed by refreshing the data so 2K are only ever displayed, but then how do you scroll back up? and you still don't know where you are in the file.

Now that I can display data from anywhere in the file, the next trick is how do you scroll around and get the data to refresh at the correct times, and maintain the location? Two libraries come to the rescue:

Whenever I draw the data to the screen, in displayHexDump, I do the following:

The functions SetupScrollDownWaypoint(); and SetupScrollUpWaypoint(); don't actually exist, but that is what the code is doing. I used these waypoints a lot originally, but then I realized that if the user just grabs the scroll bar and yanks it to the bottom of the file, you can jump past the way point and no data get's displayed, so I had to create the function outOfRangeScrollHandler to see if the user was displaying our data or had scrolled outside of it (the waypoint code may no longer be necessary due to this function).

I also do some checks if the mouse button is down or not to see if the user is still dragging the scroll bar around.

Once the code decides the user has scrolled outside the screen, it calls a common function I wrote called scrollToByte(scrollLocation);. This checks if the scroll location is outside of the currently painted data, and if it is, then repaint the data (set up waypoints again, etc.) and go there, else, smoothly scroll to the location with jQuery.ScrollTo.