I've been continuing to work on IceBuddha. 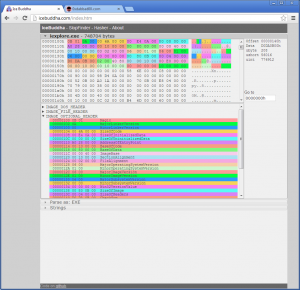 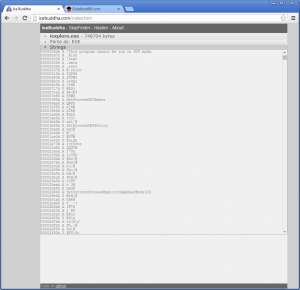 SlopFinder has also been updated to be a little prettier and work with both 32-bit and 64-bit binaries. I think at this point, it's safe to say you should try it out against whatever binaries you want and go yell at the developers if it is a commercial company, or just politely request or send a code diff if it is an open-source project. 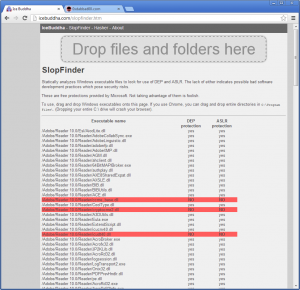 I have also started working on Hasher, which is a quick and dirty tool to let you drag and drop files and see their hash. The idea came about when someone at my office was asking if there was a tool to do this (and one that was trusted enough for the company's customers). I knew it would be easy (at least to have minimal functionality for his use case), so I hacked one together. It does not support files over 10MB though, and it hashes all the files in their entirety in memory at the same time.

You can also use http://onlinemd5.com/ for doing what Hasher does, but that site sketches me out because there is no contact info, no "About", nothing. Creepy. At least have an alias like I do. :)

I have a plan to create some tools to help people doing support, and eventually try to "port" a lot of the bash command-line tools to the browser, but I'm going to start with just seeing what I can do with web versions made for the web (so GUI versions) and trying to see what I ultimately want to do with that functionality. For example, maybe support wants to tell someone to grep a log inside a tar ball for any errors so it could all be done in the browser. Just a thought, probably one of those things that only sounds cool for a very limited set of problems, so not worth the effort.